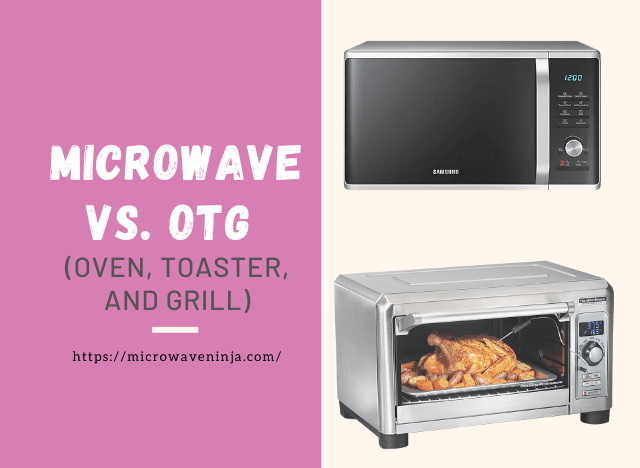 A microwave oven uses a magnetron to produce microwave rays that cook food instead of heating coils and heat conduction. An OTG depends on heat conduction like a conventional oven but it comes with extra appliances to make it more valuable, like a grilling and toasting function for bread and meats.

So should you invest in a microwave or an OTG appliance? In the debate of microwave vs OTG, which is better?

The OTG device or appliance offers three functions or appliances in one product. Not only does the microwave have to contend with an oven. It also has to deal with a toaster and a grill in the same device. Hands-down, in that perspective, the OTG outdoes the microwave.

However, the microwave outdoes the OTG in several departments, particularly quicker cooking times and a much more even distribution of heat.

The Argument for Microwaves

The OTG does its heating using electric coils. In contrast, a microwave uses electromagnetic waves to cause food particles to vibrate or oscillate, which in turn heats them up. In fairness, a microwave oven’s turntable or rotating antenna distributes heat more evenly compared to an OTG.

The Argument for OTGs

OTGs use less power compared to the high-power microwave. Most stores also price OTGs more economically while microwave ovens—even mini microwaves—tend to end up on the expensive side of things.

On top of all that, you won’t need to buy a grill or toaster since the oven serves as both or all three. It gives you the most bang for your buck, in short.

What is an OTG?

An OTG or Oven Toaster Grill (sometimes referred to with the redundant moniker of OTG oven) offers three modes or settings in one, making it three appliances—an oven, a toaster, and a grill—in one device.

Smaller than a traditional oven, it uses heating coils to cook food and requires preheating as well. It also has a thermostat that assists in temperature control to ensure food ends up heated or cooked properly without overdoing things.

What is a Convection Microwave?

A convection microwave essentially turns the microwave into a two-in-one device itself, with it doubling as a convection oven. It adds many features to the standard microwave oven on top of boiling, reheating, and defrosting.

It also uses microwave radiation or short-frequency radiowaves to cook food at a quicker pace. However, you can switch it to convection mode to bake cakes much bigger than the size of a mug or a dish as well as crisp or grill meats.

Differences between OTGs and Microwaves

In particular, you can’t use conductive metal containers on microwaves because it could cause the arcing phenomenon. This is when electricity and sparks shoot out of the metal container, thus becoming a fire hazard inside your appliance.

Both could technically bake cookies and cakes or heat up food. However, the microwave uses raw electrical radiowave power that heats the food directly instead of using heat conduction that heats up the whole interior including the food.

Thusly, OTGs could bake, toast, and grill better than microwaves while microwaves heat up food much faster through water molecule oscillation from microwave radiation exposure. To grill with your OTG, the top coil should be heated up. To bake normally, you need both coils heated up.

An OTG could also keep warm and reheat food, but a microwave does it faster. However, when you overdo it, a microwave could also dry out your food while an OTG risks burning the food to charcoal.

How OTGs work vs. How Microwaves Work

The baker’s delight invention remains the OTG. A conventional or convection oven works even better, but between the OTG and the microwave, the OTG wins out. It bakes homemade birthday cakes, spongy brown muffins, and crispy cookies to perfection.

Even with exact baking recipes, the mugcakes you can bake with a microwave tend to be half-baked. You have to compromise. In exchange for faster cooking, you get soft brownie-like cookies with the average simple microwave with no convection features.

Additionally, a convection microwave tends to be more expensive than an OTG all for the sake of combining OTG abilities with the quickness of microwave cooking.

Can You Use the Microwave as an Oven?

In certain cases, yes. In other cases, no. You can bake with a microwave in the case of mugcakes and cupcakes. However, a conventional or convection oven remains superior to the smaller baked goods portions you can get out of the microwave.

A microwave with convection oven mode can double as an oven. However, a microwave alone limits your baking, grilling, and toasting capacity. You can’t even toast bread with a microwave. At most, you can turn the bread crispy but it won’t go brown.

You can’t bake a cake with a microwave either. At best, you can bake a mugcake or anything mug-sized in order to focus that microwave radiation energy into a smaller area.

Even though the Oven-Toaster-Grill cooks slower and requires preheating time, it comes at a much lower price compared to the microwave. Microwaves make it safer for you to heat food or reheat leftovers safely. However, it’s much more limited.

You can’t bake with it. You can’t grill, crisp, or toast anything either. It’s mainly used by many households as a leftover reheater and food defrosting machine. If you wish to be a homemaker baker, you require the services of an honest-to-goodness oven or even the three-in-one OTG.

Can You Put a Microwave on Top of a Fridge? 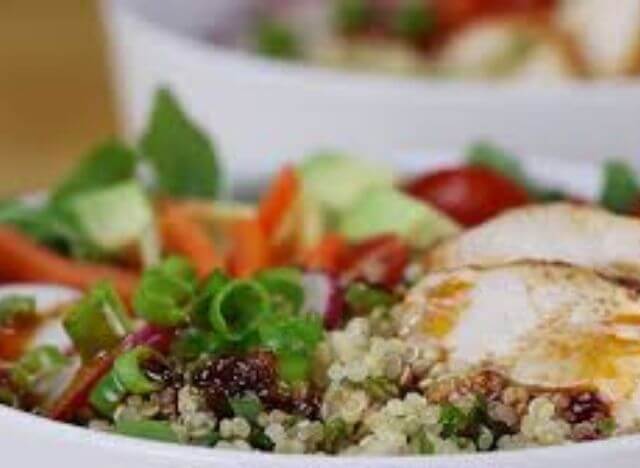 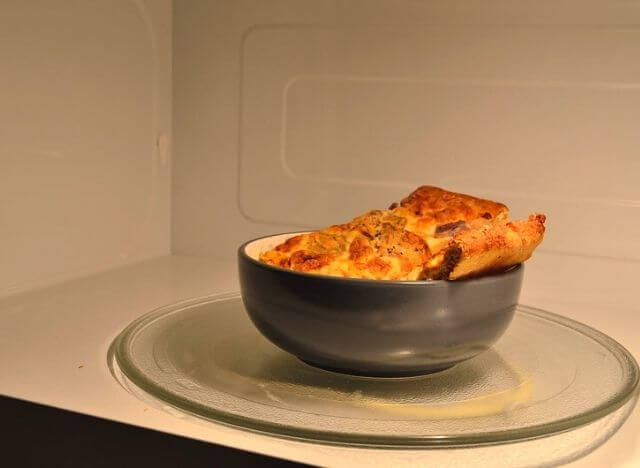 Can You Microwave Pizza or Should You Just Use an Oven? 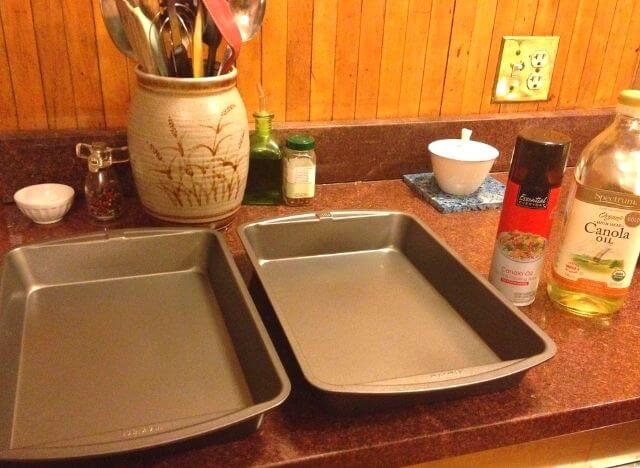 What size does microwave fit a 9×13 pan?